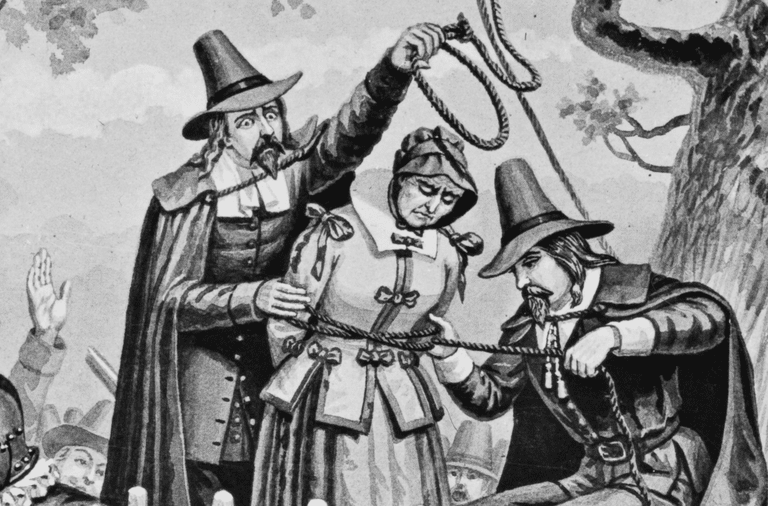 In 1692, the village of Salem was overrun with a dark cloud of evil. They believed the devil walked among them. History holds many tales much like the one you are about to read. Religion and fear, the group ideals become a mob mentality. This is but a small fraction of the victims of historical witch hunts. This is the story of an entire town struck by fear of the unknown and the supernatural. This is the Salem Witch Trials.

“Our Father who art in heaven, hallowed be thy name. Thy kingdom come. Thy will be done, on earth as it is in heaven. Give us this day our daily bread; and forgive us our trespasses, as we forgive those who trespass against us; and lead us not into temptation, but deliver us from evil.”

Minister of Salem Village Reverend Samuel Parris catches word that his daughter, 9-year-old Elizabeth “Betty” Parris, and his niece, 11-year-old Abigail Williams are all of a sudden acting very strangely. It was reported that they hid under tables, barked like a dog and screamed out in pain. As days passed with no improvement for the girls, the village doctor, William Griggs, was called to see to the girls. His diagnosis shocked the village of Salem and set in motion a horrifying set of events. He believed the girls had been bewitched.

For a doctor to make such a claim may seem odd, but Salem Village was a 17th-century Puritan settlement. Puritan’s were more Christian than any Christian’s before them. Believing in the purification of the Church of England through traditional worship. So needless to say Witchcraft was a big deal. 1485 saw the Pope declare witchcraft to be more a reality than a myth. Salem Village was also under threat of attack by warring Native tribes and had undergone a recent smallpox epidemic, so the morale was low and risk of hysteria high.

So when the daughter and niece of the village Minister are believed to be cursed by witches, all hell breaks loose.

Mary Sibley, a neighbour of the Parris’ instructed on of Rev. Parris’ slave’s, John Indian, to make a witch cake. A witch cake was made from rye meal and urine from the afflicted girls and then fed to a dog. The idea was that the witch who afflicted the children would be hurt as the dog ate the cake, revealing their identity. Unfortunately for Mary Sibley, even white magic was frowned upon by the Puritans. Rev. Parris said during his sermon that Sibley went “…to the Devil for help against the Devil.”Whilst she did not face any actual punishment, she was made to admit her errors to the congregation, luckily for her, the congregation was satisfied with her admission.

12-year-olds Ann Putnam Jr. and Elizabeth Hubbard become the next victims to fall to witchcraft. Along with Betty and Abigail, the girls claim that they were bewitched by Parris’ slave Tituba, Sarah Good and Sarah Osborne. It is believed that Mercy Lewis, a servant of the Putnam home was also afflicted.

Tituba was Rev. Parris’ slave and the wife of John Indian. She was the first to be accused of witchcraft by the afflicted girls in Salem Village. It was believed that she had been showing the girls ways to practice voodoo. According to the girls, she told them stories of sexual encounters with the devil, controlling the minds of men and fortune-telling.

Sarah Good (Born July 21, 1653) was a homeless beggar woman. She had an appalling reputation and was dependant on other people. Her own husband, William, believed her to be a witch due to her “bad carriage to him”. Sarah rejected the Puritan values, which to the people of Salem Village was confirmation of her witchy ways.

Sarah Osborne (Born 1643) had not attended Church in nearly 3 years, due to a severe illness. The girls claimed she pinched them and prodded them with knitting needles whilst bewitching them. It should be noted that Sarah Osborne was in the process of a legal battle with the Putnam family, so it is very possible that Ann’s family put Sarah Osborne’s name in the mix for their daughter to accuse.

Each of the women who were initially accused were considered outcasts of society. They were targetted for their differences, their rejection of the Puritan ways and their independent nature.

On March 1, Tituba, Sarah Good and Sarah Osborne appear in the local tavern where they are charged with performing witchcraft on the four afflicted girls.On March 2, the first trials begin. March 7 saw the three women found guilty and sentenced to prison.

Shockingly, Tituba confessed to taking part in witchcraft. She confesses to taking part in the Occult ritual in which the witch cake was made, telling the court that she was taught the method from an old master who showed Tituba how to ward off evil. She spoke of black dogs, hogs, a yellow bird, red and black rats, cats, a fox and a wolf and claimed that she and the other accused flew around the town on sticks. In her confession she mixed many different notions of witchcraft from different cultures, this led the town to believe that Satan himself was among them.

In the absence of a confession, there are many methods to discover a witch amongst the town. The people of Salem used few of these methods. The most common was to ask an accused witch to recite the Lords Prayer. If they were unable to do so correctly or in full, they were a witch. Another method was to dunk the accused witch in a river. If they drowned they were innocent, if they lived they were a witch and sentenced to die anyway. Flawless logic, clearly. It was also believed that when witches made their pacts with the devil, they engaged in a sexual encounter in which Satan himself would leave a mark on the witch, called witch’s teats. Throughout witch hunts worldwide, accused witches were forcibly stripped naked and their bodies searched for the mark. Which could be anything from a mole to an unfortunate birthmark.

As hysteria builds in Salem Village, more women are accused of witchcraft.

On March 11, Martha Corey (Born 1619 or 1620) was accused. She was sceptical about the legitimacy of the young girl’s claims, which drew attention to her. She is put to trial on March 21, 1692, she wasfound guilty of witchcraft and thrown in prison. Her Husband Giles, would later be accused of being a witch. 1692 Salem believed in Witchcraft Equality.

On March 24, Rebecca Towne Nurse (Born February 21, 1621) was accused. She was a well respected 71-year-old woman. She was accused by Edward and John Putnam. The most likely cause for the finger being pointed to her was that she had a benevolent nature. Rebecca Nurse was an extremely religious woman, upon her arrest she exclaimed:

“I am innocent as the child unborn, but surely, what sin hath God found out in me unrepented of, that He should lay such an affliction on me in my old age.”

On the same day, Dorothy Good (Born 1687 or 1688) was accused. She was the daughter of convicted witch Sarah Good. Dorothy was four-years-old at the time she was accused of also being a witch. Ann Putnam and Mary Wolcott claimed the girl was deranged and bit them like an animal. Mind you, she was four. Dorothy herself would state to Salem officials whilst she was in prison that she owned a snake her mother had given her and that the snake spoke to her and sucked blood from her fingers. At this time she was five, hardly a star witness.

April saw 23 more people accused of witchcraft and thrown in prison. May saw 39 others join them. Increasing panic and fear had neighbour turn against neighbour, mother against daughter, father against son.

May 14 saw William Phipps and Increase Mather arrive in Salem Village. The new governor and minister respectively, formed the Court of Oyer and Terminer (“to hear and to determine”), and on June 2, the first death sentence for a witch was passed.

Bridget Bishop (Born 1632) was believed to be the local tavern owner. After her third husband died, he left the tavern to Bridget. Bridget was outspoken and deliberately rejected the Puritan’s code of dress. It was also found that she had a third nipple, which is a surefire sign, according to the Salem Village, that she was a witch. Others accused of witchcraft claimed that a dark figure that resembled Bridget visited them, threatening them with physical violence or drowning if they did not write their name in Satan’s book. She was trialled and found guilty of witchcraft on June 2. Bridget Bishop was hanged on June 10, 1692.

Bridget Bishop. Hanged from a tree.

Sarah Good. Hanged from a tree.

Rebecca Nurse. Hanged from a tree.

Susannah Martin. Hanged from a tree.

Elizabeth Howe. Hanged from a tree.

Sarah Wildes. Hanged from a tree.

George Burroughs. Hanged from a tree.

Martha Carrier. Hanged from a tree.

John Willard. Hanged from a tree.

John Proctor. Hanged from a tree.

Giles Corey. Pressed to death under stones after not entering a plea at his trial. This method was more as a form of torture to force a confession. The accused was stripped naked and a heavy board would be placed over his body. One by one, heavy stones are placed upon the board. The officials would return to Giles multiple times and ask if he wanted to confess, each time he would reply “More weight!”. Giles Corey was 81-years-old. The torture started on September 17, but he did not succumb to deaths warm embrace until the 19th.

Mary Eastey. Hanged from a tree.

Martha Corey. Hanged from a tree.

Ann Pudeator. Hanged from a tree.

Samuel Wardwell. Hanged from a tree.

Mary Parker. Hanged from a tree.

Alice Parker. Hanged from a tree.

Wilmot Redd. Hanged from a tree.

Margaret Scott. Hanged from a tree.

Those who died in prison

As the body count rises, reality begins to set in. Governor William Phipps orders that no more townspeople be arrested for witchcraft. He then dissolves the Court of Oyer and Terminer on October 22.

Court of Judicature, Court of Assize and General Gaol Delivery resides in Salem. Those remaining in prison awaiting trial for witchcraft have their day in court. Those who are found innocent are released, those guilty are pardoned by Governor Phipps, but they remain in prison. In May, 1693, Phipps orders those imprisoned for witchcraft be released upon payment of their prison fees.

Modern Salem and Other Developments.

The town of Salem has today been reclaimed by the witches. Those who practice witchcraft of all kinds now live and thrive in Salem. The town is home to many witchcraft stores and most of its tourism comes from those wanting to see the memorials to those innocent people murdered by the Witch Hysteria of 1692.

But a question still remains? What caused the initial afflicted girls to behave the way they did? Why did they have fits and throw themselves around? Were they really cursed by witches, or was it something else?

One theory is that the girls were bored. Another is that their fits were caused by eating rye bread infected with Claviceps purpurea a fungus (the natural ingredient in which LSD is derived) that causes psychological hallucinations, seizures and sleep paralysis. The fungus can also cause paranoia and hysteria. It is possible the whole town was infected, mix that in with political and jealous motivations, a Puritan society and an unhealthy fear of the supernatural, and you’ve got a recipe for a Witch Hysteria which takes the lives of 20 people and two dogs. Poor Fido.

The Witches: Salem, A History. By Stacey Schiff (Book).